A school for tomorrow's technologies

A school for tomorrow's technologies" />

A school for tomorrow's technologies" />

A graduate of Grenoble INP - Phelma, UGA, Materials science and engineering (SIM) course, and a doctoral student at 3SR*, Clara Aimar has just been awarded first place by the jury at the “My Thesis in 180 Seconds” (MT180) competition at the Alpes finals. She works alongside Décathlon on polymer foams for sports shoes. 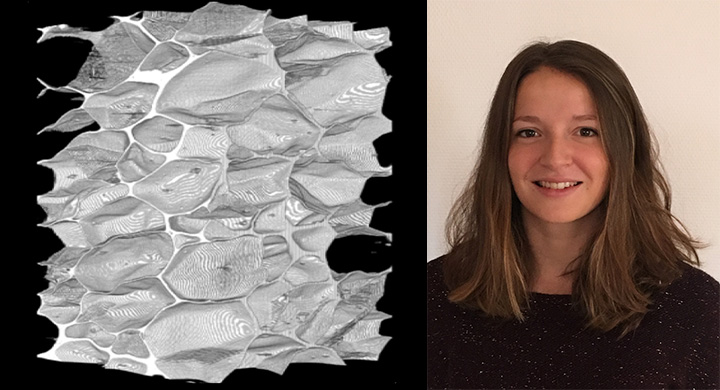 Her presentation on polymer foams has paid off! Clara Aimar, who is currently completing the second year of her thesis at 3SR, was selected by the jury at the MT180 Alpes finals on 9 March. The young researcher, who joined Grenoble INP - Phelma after spending two years exploring her passion of materials at La Prépa des INP (preparatory classes) in Toulouse, is now working on the polymer foams that are used to create the soles of sports shoes.

Her internship at Décathlon, as part of her final year engineering project, inspired her to pursue her work through a thesis. She aims to make polymer foams more resistant to repeated mechanical stresses, so that sports shoes would better protect athletes for a longer period of time. “This project not only focuses on the health of runners, but also that of our planet,” points out Clara Aimar, who is adamant about reducing waste. “Currently, our best shoes have a 1000-km lifespan. Ideally, we would like this figure to increase by a factor of two, and then by ten. ” In order to do so, the researcher is working on optimising the “formulas” for these foams: the ingredients, the shaping processes, the “cooking” temperature, etc. She hopes to obtain new textures that will improve the mechanical properties of the foams, which will then need to be tested prior to industrialisation.


Her current success did not come without its share of obstacles at the start: last year, a fire destroyed the laboratory in which she worked, barely three months into her thesis. “All the machines on which I had started to set up some experiments went up in smoke,” she explains. Despite this significant setback, the young doctoral student did not give up. For several weeks, she took advantage of her time away from the laboratory to do work on her bibliography and prepare the analysis of results for the future.

Most machines have since been replaced thanks to funding from the laboratory’s sponsors - the French national organization for scientific research (CNRS), Grenoble INP and the University) - which has allowed Clara to carry on with her experiments.

Alongside Maxime Leprince, a doctoral student at CERMAV (CNRS) and CEA-Leti institute, Clara will represent the “Grenoble Alpes Savoie Mont Blanc Universities” group at the national MT180 competition semi-finals organised in France by the CNRS and the CPU. While awaiting the results, she will be keeping an eye on her competitors’ projects from other regions. Best of luck to her!